Oh SamiJo, how I miss you.   I’ve cried a lot and believe writing this blog and posting pictures of you are healthy for me to grieve, even one year later.  Samantha Josephine Botkin ~ January 10, 2002 to January 10, 2018. 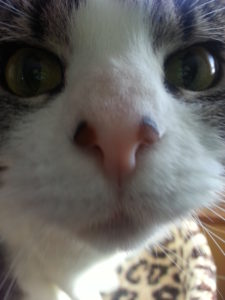 I have many memories of Sam. She’s the only store bought cat I’ve ever owned! We definitely got our money out of that Aqualand purchase, back when the kittens were for sale in the window. 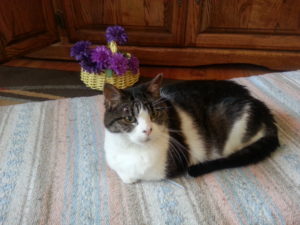 16 years is a long time to spend with me, and we both sure went through a lot! Sam’s fur was soo soft and she smelled sooo good!  I loved pushing my face in her coat and taking big sniffs! 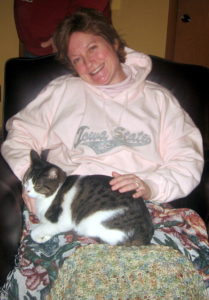 After that, she pretty much was always near me! Although she loved cuddling up with ArinJune too! 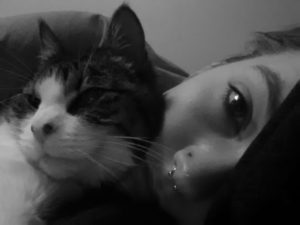 Here’s just a few more of the many pictures of Sam I’ve taken over the years. 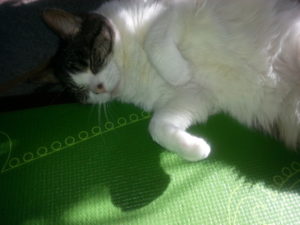 Isn’t she special! As I believe all cats (and cat owners) are! 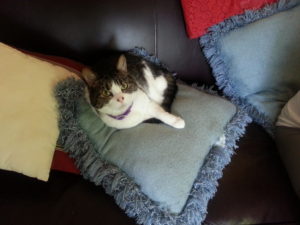 I love this shot with Sam lounging on the blue pillow (which I salvaged out of my mom’s dumpster when she cleaned her house out before moving to Florida after dad died in 2016), the colors being a perfect background!

Below is the last photo I took of her, the day I called  my vet and was referred to the Iowa Vet Referral Service on Merle Hay Road (highly recommended by me). 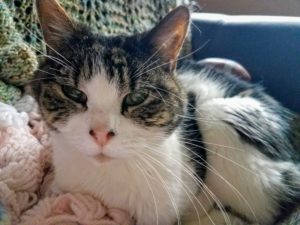 When I look closely into her eyes, I can see me. A week after she was euthanized, I picked up her ashes and on the trip home, I saw a rainbow in the sky!!! It was the Rainbow Bridge without a shadow of a doubt. If you’ve experienced this before, you know what I mean. Believe me, it’s breathtakingly true.

The box for her ashes is beautiful, its’ home in my bedroom is near where she slept.  Her clay paw prints have a special place as well, which I fill with essential oil, vanilla recently, for a nice aromatic reminder of the love of my life Samantha Josephine Botkin. Prrrrrrr.  I’ll never ever forget our time together on this earth! Till we meet again girlfriend.

Just an update to let my readers know I am nearly done with my most recent learning adventure through George Washington University….that lasted well over a year! I certainly learned a lot about forensics rehabilitation consulting, and really appreciate my cohort comprised of really smart rehabilitation counselors across the country!

There are students from the great states of Iowa (me!), Texas, Ohio, Washington, Maryland, North Carolina, Virginia, Colorado, the District of Columbia, and who am I missing? Kansas?! 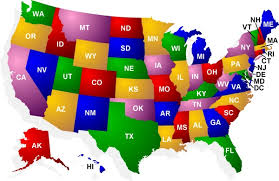 Our Beautiful Country is so Colorful!

I’ve been in all our states but Washington, Hawaii and Alaska. This was traveling done mostly as a youngster, in the back of a station wagon with the entire family (oh, the memories!).

One ethics paper I prepared in October, 2013 for the course Foundations of Forensics Rehabilitation Counseling II (COUN 6396) emphasized Ethics, Values and Character Surrounding My Career in Private Practice.

Along with submitting my paper to GWU, I also submitted it to a professor from the great State of Washington who teaches ASSESSMENTS to master’s level rehabilitation counseling students. I received powerful feedback from her. 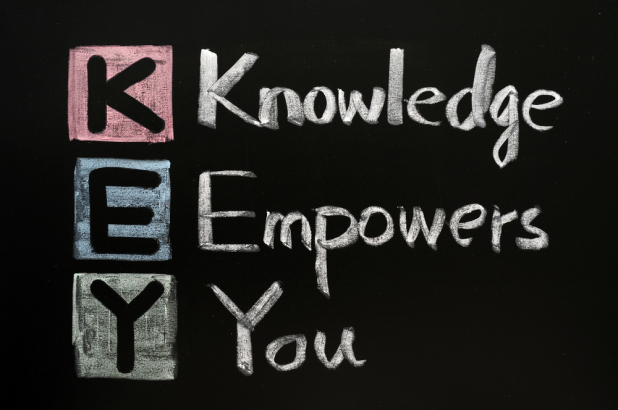 I am happy to share what I’ve learned and how it can be best applied to meet your litigation needs. My papers are available, just ask and I’ll see if you really want to read all about it! Call me at 515-282-7753 or email vocresources@gmail.com.   Or easier yet, connect with me on LinkedIn. I’ve posted them there! 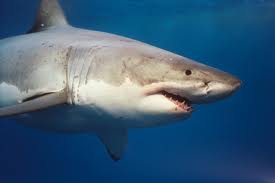 Jake is a student in the Aquarium Science program, taught by Kirk Embree.  In the program, students experience aquatic animal husbandry and aquaculture in a new facility modeled after a public aquarium.  The “fish” are on the 3rd flood of the “old tech high building” and you have to see it.  It’s very impressive.  The entire building is getting an incredible face lift (it used to be a Ford assembly plant).  I’m proud of what DMPS is doing to improve learning environments. 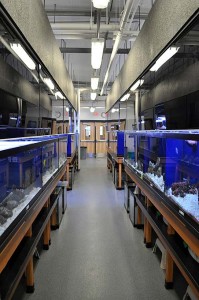 There are over 100 aquariums, totaling 16,000 gallons of saltwater!

Last year, Jake and his cohort traveled to the Bahamas for a 10 day field ecology trip and explored the ocean…..and other areas of life while down there.  He certified in scuba diving for the trip.  What stories he shared…  We are privileged to have this wonderful learning academy accessible for our youth!   Here’s a short video about the marine program.

Sharks have all the senses we have (smell, taste, touch, eyesight, and hearing). They can also sense electricity and vibrations in the water. However, a shark’s primary sense is a keen sense of smell. It can detect one drop of blood in a million drops of water (~25 gallons) and can smell blood 0.25 mile away!  To feed the sharks, I used a realllly long needle with raw shrimp on the end.  They snatched it right up and I let out a bit of a scream! 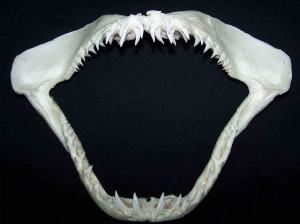 To change tones of this post I have a question.  Have you seen the movie Swimming With Sharks (also known as The Boss and Buddy Factor)?  It’s a 1994 American comedy drama film, directed and written by George Huang.

Buddy Ackerman, an influential movie mogul, hires Guy, a naïve young writer, as his assistant. Guy, who has just graduated from film school, believes that his new job is a golden opportunity. Despite warnings from Rex, the outgoing assistant who has become hardened under Buddy’s reign, Guy remains optimistic……..Unfortunately, Buddy turns out to be the boss from hell…..

The above is from From Wikipedia, the free encyclopedia. 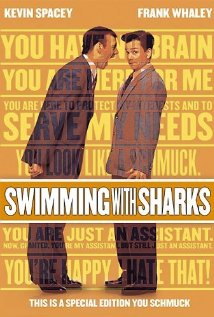 I’d rather feed than swim with the sharks!

A “shark” can be a greedy or ruthless or treacherous person.  I tend to understand that “swimming with sharks” means “working with ruthless, back-stabbing people who will stop at nothing to achieve their own goals (profit).” In this sense, a shark doesn’t care what he does to you or a company. He “attacks fiercely” in order to achieve his own goals. The “attack” could be perfectly legal, even though it might hurt a lot of other people. 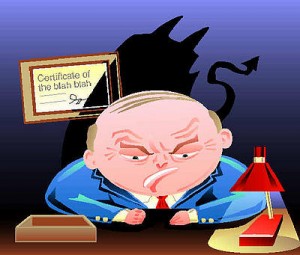 I counsel clients through the job placement process, and we pay attention if it appears there’s sharky behaviors coming from potential employers.  I also counsel myself when it comes to the potential of swimming in water that may be infested with sharks.  In a future post I will talk about my role in litigated cases as an Expert Witness.  Stay tuned and keep watch! 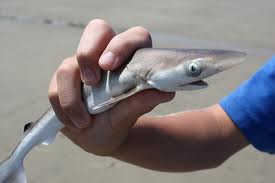